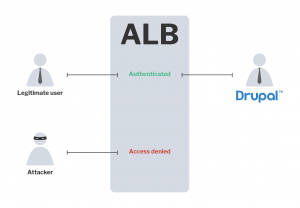 What is an Application Load Balancer?

AWS provides a service called an Application Load Balancer (ALB), which is a proxy that sits in front of the application servers to handle things like load balancing (as the name implies)
as well as supporting encrypted connections via Transport Layer Security (TLS) and, as of last May, authentication.

The authentication can be performed against Amazon Cognito or any OpenID Connect compliant identity provider.

When this is used, the load balancer adds a special HTTP header to pass the user’s identity and related properties through to the application.

We created a module that allows Drupal to pick up, understand and validate this header so that when the user has been successfully authenticated to the load balancer, they can automatically be authenticated to Drupal as well.

This is an necessary category.